Tweet
Pin It
Posted September 14, 2010 by Hilary Kennedy in Celebrity

Sarah Jessica Does It Again

an anyone be considered more fashion-forward than Miss Carrie Bradshaw herself? Sarah Jessica Parker made her debut this week as Creative Director for Halston Heritage, the company’s secondary collection that sparkles with updated Halston pieces at updated prices.  Though SJP tried her hand at an affordable line for Steve and Barry stores several years ago (which was promptly discontinued a year later,) she is once again taking the fashion bull by the horns.  What does this mean for us devotees in Dallas? Well, Neiman Marcus, Saks, and Nordstrom all carry the line, which is good news for Dallasites who swooned over two of the Heritage collection pieces worn in the Sex and the City sequel this year. 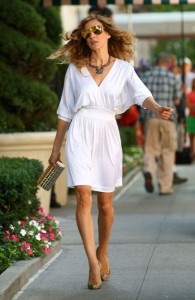 We’re heading out for Fashion’s Night Out!

A Little Obsessed With Shoes?