Tweet
Pin It
Posted February 28, 2011 by Hilary Kennedy in Fashion

ast night’s Academy Awards was a glamorous, albeit interesting event.  I have to say, I wish Anne Hathaway and James Franco had simply attended, because their hosting left so much to be desired that I am still underwhelmed.  My vote for next year goes with an appropriately modified comedy routine by hot comedian of the moment, Joel McHale.  But until then, the memory of a stoned Franco and hyperactive Hathaway lingers.

Now, on to the fashion….

There were relatively few misses, in my opinion.  Even Helena Bonham Carter was slightly more subdued in her eccentric British style.  I wish Michelle Williams had worn more color (since pale was the new tan for many starlets last night,) and Mila Kunis needed more material covering her bosoms. All that being said, the vast majority looked glamorous and Hollywood-worthy, even in those chilly temperatures. Trends on the carpet were the color red, metallics, and chic chignons. I personally loved Jennifer Lawrence’s big, bouncy Baywatch hair. My favorite overall looks of the night: hands-down Scarlett Johansson (though her dress was not loved by all,) and Gwenyth Paltrow, who almost always chooses a beautiful Calvin Klein creation. I even loved her Michael Kors on-stage gown, though I can’t say I feel the same about her song. Each lady was covered, sexy, and exuded modern beauty.

Perhaps the hosts and their non-jokes disappointed and many people feel The Social Network was robbed, but all in all I’d say it was a winning night for Hollywood glamour all the way around.

P.S. Did you hear Justin Bieber and Selena Gomez held hands at an Oscar bash? You heard it here first. Probably. 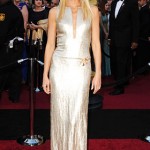 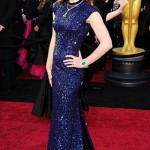 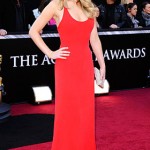 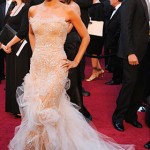 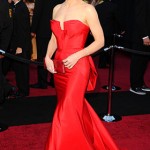 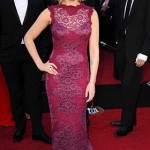 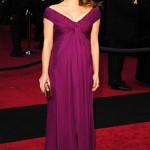