Tweet
Pin It
Posted October 24, 2012 by Samantha Alexander in Beauty 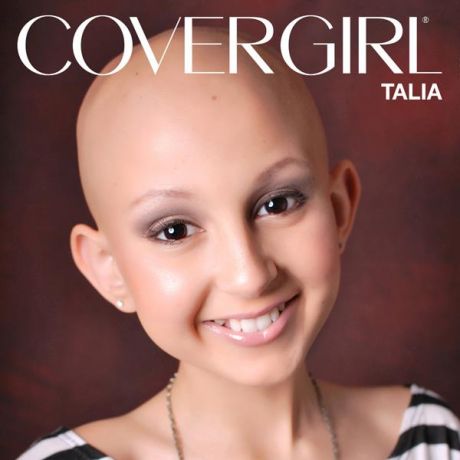 f you’ve never heard of Talia Castenallo, let me be the first to tell you how amazing this girl is. At age 7 Talia was diagnosed with neuroblastoma and even though this form of cancer is devastating to her body her mind and spirit are unaffected. She remains an upbeat and optimistic person with an infectiously joyful personality. Talia says one of the biggest things that keeps her outlook on life optimistic is her love of makeup, which she discovered soon after she was diagnosed and began using as creative outlet. She now shares her love of makeup and her developed skills in applying it via YouTube tutorials where she has gained more than 14 million views. Her interest in creating tutorials came about from her dislike of wearing wigs.

“I don’t like wigs, they’re so, I dunno… When I have on a wig I feel, not fake, just not me. When I put on my makeup I feel like I can embrace those features that I really like about myself. I feel if someone’s looking at me, they’re looking at my makeup, not looking at my bald head….I am just trying to make young girls, young adults, adults, anyone, feel beautiful by using make-up,” said Talia.

During one of her tutorials, Talia mentioned that one of her dreams was to meet Ellen DeGeneres. This dream came true on September 13th when she was invited to be a guest on Ellen during which it was announced that Talia was going to be made an honorary Cover Girl.

It’s been said many times but it bears repeating, Talia is inspirational on innumerable  levels. Her ability find joy and courage through makeup is an incredible example of how people have the power to make their lives beautiful despite dire circumstances.

Get the Look: Kristen Stewart’s Makeup

Mermaid Halloween Costume and Makeup from a Real Life Ariel